Yes, "Chain of Command" in Waziristan

Yes, the picture is about the Second Afghan War, but I like it a lot.

About this entry, I have, finally, written a pair of Army Lists for the Third Afghan War to use with my new rulebook, "Chain of Command". I have read some very interesting AAR´s in different blogs that are not based in the WWII, and I have seen that the rules works very well. So I have prepared a List for the British Indian Army and another for the Afghan Forces.


First one, the Afghan Forces. I have written a list to use with the Afghan regular troops and also the tribesmen. I have used the information I have and, also, a pair of Army Lists for the Spanish Civil War there are in the Too Fat Lardies Yahoo Group. They are very useful for anyone interested in the first months of that conflict.
Afghan Army List 1919


Second one, the British Indian Army List. I have also used some ideas from those Spanish Civil War lists. I think this list is very useful to represent small patrols or garrisons.
British-Indian Army List 1919

Both lists are, in this moment, "work in progress", but I expect to use them as soon as I have some more Indian models. I don´t like these from Woodbine, and I´m awaiting the new models from Empress, but, probably, I will buy another section from Woodbine, to have a solid patrol, at least.

On the other hand, I am reading a new book about this war: 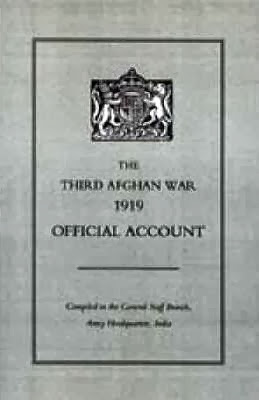 Chain of Command in Waziristan?

This days I have been very busy reading the new rulebook from Too Fat Lardies, "Chain of Comand" and, also, painting the lot of figures I have for the Pacific Campaing so I have had not much time for this, my "only" project for this year...
I like a lot the WWII gaming at the platoon level, and "Chain of Command" is, in my opinion, a perfect rulebook for it. After my test game with "Mud and Blood" also from Too Fat Lardies, I was looking for another ruleset not so complex and fixed in the Western Front, and I think this new one can be the solution.
I have written an entry about "Chain of Command" in my other, general gaming, blog that can be read HERE so I´m not going to talk (or write)  more about it until I have played a game (but there are necessary a lot of figures to have a platoon of USMC or Japanese!!!).


Of course, after the painting of my last figures from Empress Miniatures, I had a great and brilliant idea: Why not use "Chain of Command" to play games based in my project? In this way, I can maintain myself fixed to this fantastic ruleset and, also, loyal to my "only" project.
About "Chain of Command", I think that the Patrol Phase is perfect to represent the "small war" of the British patrols looking for ambushes and hidden enemies and all the command and control mechanisms can be used without problem in this conflict of small units. The rest of the rules are really common to any XX Century conflict; of course, without so many authomatic weapons and AT teams...
To this end, I have written already a British Army List to use with "Chain of Command" and I´m working with the Afghan Army List in this moment. This one is the link to the British Indian Army List: British-Indian-Army-List-1919
I would like to know the opinion of anyone of you interested in it. Thank you in advance.
About those figures I have painted, they are, of course, the Afghan tribesmen command group; an interesting bunch of wolves: 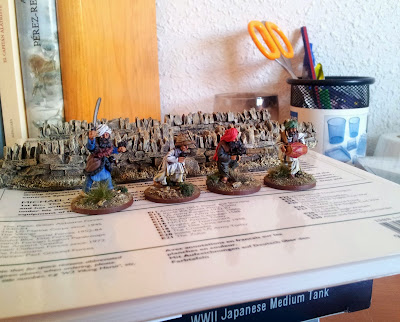 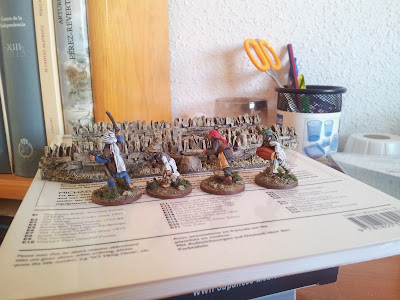 As all of them, fantastic models. I´m awaiting more news for this range of models; perhaps, Khyber Rifles or Indian Infantry? I need Mr Hicks returning to the workbench!
On the other hand, I have also painted some walls I bough in Ebay from Tiny Worlds Wargaming. They are very nice pieces, very easy to paint, and I expect to buy another pack of them, this one with eight smaller broken and un-broken walls: 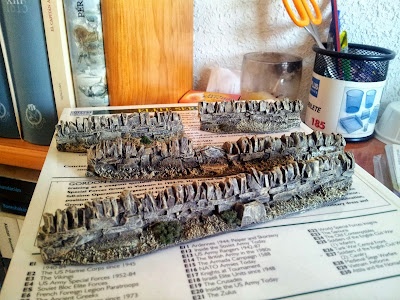 This picture has interested me a lot since the first time I saw it in an old book: 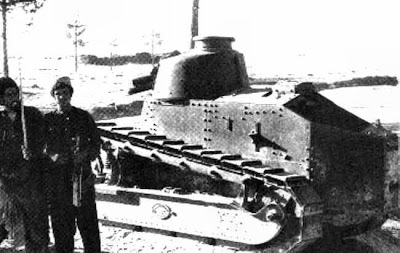 Literally: "The first tank ever knocked out by Afghans - in 1919! This Renault FT17 was used by the British Tank Corps in the Third Anglo-Afghan War and was outside the fortress of Spin Baldak, held by Kabul regime forces until 1988".

There are a lot of remnants of many countries that lay, ruined, in the Afghan landscape, on the side of the roads or "decorating" various junkyards, as this picture from the KMTC in Kabul shows (and it is only a very, very, very small portion of that junkyard): 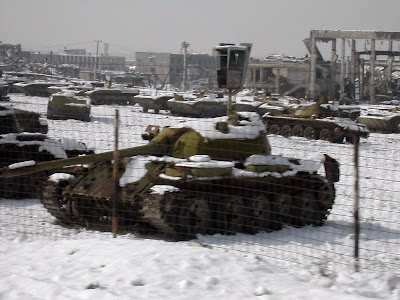 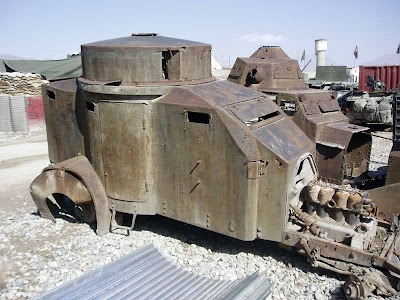 Very dangerous, but also a treasure of military history.

Well, about the history of this tank:
During operations in Afghanistan in 2003, Major Robert Redding, an US Special Forces serviceman, found the rusted remnants of two WWI era Renault FT17, tattered and disassembled, while visiting an Afghan scrap yard in Kabul. Redding sent digital images of the tanks to the Patton Museum of Cavalry and Armor in Fort Knox, Ky, asking if the Museum would be interested in acquiring them. That was Friday, and by Monday he had seven enthusiastic responses. 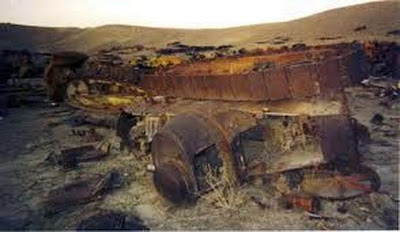 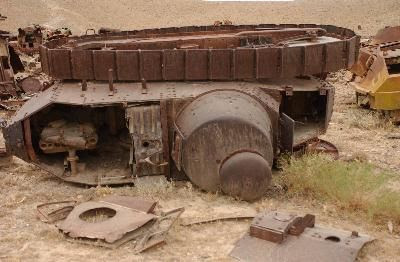 The Museum was very interested in bring the tanks back to the States because, in that moment, their previously owned FT17 tank had been sent back to France at the request of the French Government because it was a very rare tank and France was really interested in getting and keeping intact equipment (in fact, France was more interested in finding an engine, because they had already a body of a FT17).

This model of tank has also a great interest for the United States Army because it was the model used by the US forces in the Great War. In fact, George Patton, then a captain serving under General John Pershing, was one of the first to learn how to operate this tank. 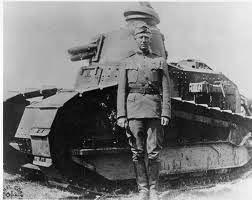 There were made about 5,000 FT17, the first one to have a full traverse, 360º rotating turret. It was a light vehicle with a weight of 6,700 kgs, but not fast. It had a two men crew, a driver in the front center of the vehicle and a commander in the small turret. Today, there are probably no more than six or seven of them in existence, like this one owned by Spain, a veteran of the Marruecos Campaings and the Spanish Civil War: 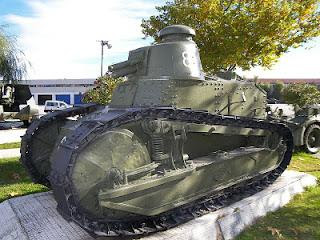 Fort Knox personnel arrived in Kabul in May 2003 to examine the tanks, which were in a relative good shape because of the Afghan dry climate, but they were dirty and missing armament and other components. On the other hand, both tanks still had their original engines, complete tracks and most of their parts. With the tanks found, they had to be sent to the States and the first step was getting permission from Afghanistan, the owner of the vehicles, so Redding went to Afghanistan´s Deputy Minister of Defence, General Abdul Rashid Dostum, also commander of Northern Afghanistan. Fortunately, he was more than willing to concede permission, as a gift for what the United States had done for his country. He allowed one of the tanks to be taken out of Afghanistan, to the Patton Museum.

With the help of French Major Thierry Delbarre (at right in this picture), the project manager and historians from the 326th Military History Detachment, a reserve unit from Columbus, Ohio, such as Major Charles Boyd (at left in the picture), the best tank was chosen.

A curious history, but were there British tanks?

The idea that it was captured to the British during the Third Afghan War is a pure fantasy; the British Army didn´t have FT17 in its inventory and, certainly, not in India! The curator at Fort Knox that restored the vehicle believed that the Afghan Renaults (there were at least four of them prior 2003) were examples bought by Poland and captured by the Soviet Union during the Polish-Soviet War of 1919. They were then presented to Afghanistan when this country became the first state to officially recognise the Soviet Union under the Afghan-Soviet Treaty of 1921. 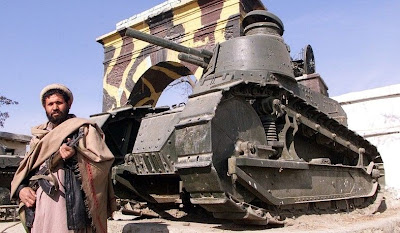 Another FT17 tank, this one displayed in Kabul. This could be another one of the Polish tanks captured by the Soviets and re-equipped with a Hotchkiss 37mm naval gun or, perhaps, one of the White Russian Renaults built between 1920-1921 (and also captured by the Reds). 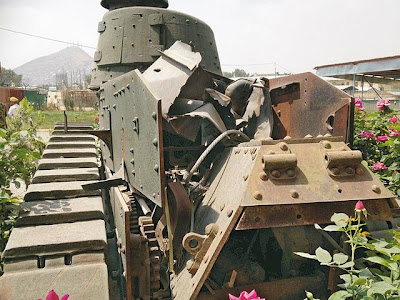 This was found in the backyard of the Afghan Ministery of Defence and the Polish diplomatics were so interested in it thatit  was finally gave to them as a gift and sent to Poland to be restored and put on exposition. 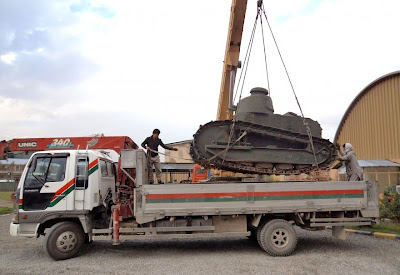 Finally, I have been able to learn that there were four Renault FT17 given as a gift by the Soviet Union to Afghanistan in 1923. They had been captured in the Battle of Równe, on 5 July 1920... because they had been abandoned by the Polish forces. One of them is now restored in the United Stated, a second one is, also restored, in Poland and a third one is restored and exposed in front of the Ministery of Defense in Kabul.

For me as a Military History enthusiast, it is a great news but for my Third Afghan War project it is not good. I was thinking about to deploy an "Afghan Tank Korps" using a FT17 model in 1/56 scale I have from FAA Models: 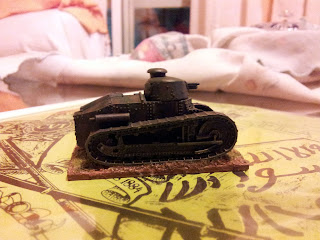 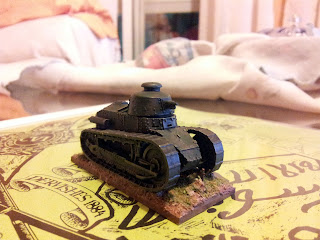 The RAF in the North-West Frontier, 1919 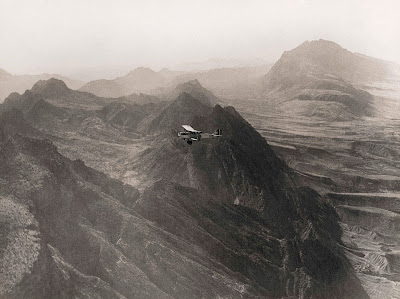 Although limited in number and quality, airpower played a key role during the Third Afghan War.
The RAF had arrived to the Frontier in 1916, for the Mohmand campaing and also against the Mahsuds in 1917. In 1919, the only aircraft available on the Frontier was 31 Squadron at Risalpur, east of Peshawar, that was equipped with BE2C of limited performance, and a flight of 114 Squadron at Quetta, also equipped with BE2C.
These machines were obsolete and worn out airplanes with so a low climbing power that they could be shot from the hill tops as they passed along the valleys. On the other hand, their moral effect was great and the bombing of Dakka, Jalalabad and especially Kabul, were factors that "help" the Amir Amanullah to decide about to sue for peace.


There were a total of five RAF squadrons deployed in the war, equipped with BE2C, Bristol F2B, De Haviland DH9A and De Haviland DH bombers. They allowed the British to extend their reach well beyond the border, bombing Kabul itself but also harassing the retreating and defeated Afghan regulars and breaking up tribesmen forming larger groups prior the launching of an attack.
They proved the value of the modern air-power in long range reconnaisance missions, in the bombing concentrations of tribesmen, supply depots and transport columns, but they were not really useful in the short range, tactical, reconnaisance, in which the enemy could hide in hearing their aproach, so bodies of the enemy were difficult to locate and negative information about them must be regarded with suspicion.
It can be said that the most important element was their moral effect over the Afghan hearts and minds. For example, the single-plane raid on the Amir´s palace that took place on 24 May 1919 caused little real damage but greatly impacted the morale of the Afghan people and of Amanullah himself, helping him to go to the negotiating table.


During the course of the war, British aircraft losses were of one plane crashed and two shot down. A not small price against a primitive foe.
I have an 1/48 BE2C that I bought a lot of years ago for my "Back of Beyond" games; it can be a good moment to prepare it for another war...
Publicado por Juan Mancheño en 19:58 8 comentarios: 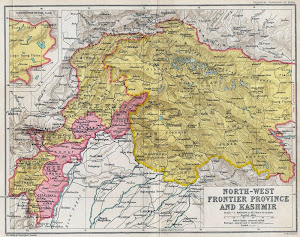